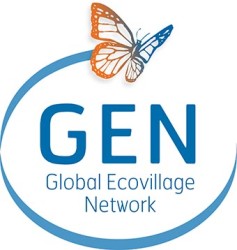 GEN is first and foremost a network, not an organisation, but it is serviced and coordinated on different levels through several organisations. GEN International, which has its head office here in Findhorn, is one organisation, existing within the network providing global support, network weaving and amplifying services that require global coordination (e.g. data collection and visibility of the global network, support for inter-regional communities of practice, online platforms). GEN supports the transition to sustainable livelihoods and self-sustaining organisational models for all parts of the network. GEN as a network is coordinated through the five GEN Regions and the youth movement NextGEN that supports communities on the ground, and carries out region-specific programmes.

Officially launched in 1995 with John Talbott and Diana Gilman at Findhorn during the conference Ecovillages and Sustainable Communities. Since its inception GEN has grown from a network linking 9 ecovillages across the globe to a woven tapestry linking beyond 6000 communities on all continents. GEN International as a Scottish Charity was established 7+ years ago and has had its office and some of its staff based in Findhorn since then, whereas other staff members work remotely from all around the globe.

GEN’s General Assembly (GA) and Board of Trustees are made up of representatives appointed by each of the 5 GEN Regions. Together, the GEN Board and GA oversee GEN’s strategic direction and finances – and their conversations, at the heart of the GEN network and organisation, are characterised by their global and intercultural nature. GEN’s dedicated Staff team works hand in hand with regional staff and other partners to implement GEN’s objectives and targets. The GEN Elders and GEN Advisory Board share their wisdom and advice at crucial points. 2020 was a very transformative year for GEN International as Kosha Joubert left her role as Executive Director and passed on the baton to the next generation of collaborative leaders after twelve years of deep work within the network and organisation. At the same time in April 2020 the Board and Staff, working with the Network, set up a Restructuring Team to engage with everyone in GEN and with our stakeholders, and to bring back recommendations for GEN’s future, development, leadership, structures, financial strategy and relationship with Gaia Education which will be implemented in the coming years.

Projects from GEN International happening on the ground, connected to Findhorn or the local area:

Since 2016, 14 volunteers from Sweden, Germany, Hungary and Portugal have come to Findhorn to work through the European Solidarity Corps Programme with GEN.

The Erasmus+ programme, funded by the European Commission, enables GEN to support young people who share the vision of a world of empowered citizens and communities to develop skills and experience in projects, work in an international team, and gain communication and cooperation tools – empowering them as lifelong leaders. Based in Findhorn, they also witness and experience a sustainable lifestyle and social cooperation that ecovillages model.

In the past the volunteers usually lived in Cluny or other accommodations of the Findhorn Foundation in their first weeks or months to start their journey here in Findhorn with the FX and following programmes held by the FF. At the same time their service department was split into the work for GEN and a few hours a week working in the garden, the kitchen or home care department. After becoming acquainted with the community, they had the opportunity to move into their own place or to continue living in communal accommodation depending on availability and their interest. Their time is split between working in the GEN office, living in Findhorn or the area close by and engaging themselves in their own way with the Findhorn community.

In GEN volunteers are working to support different Focus Areas across the organisation. Specific areas of involvement vary slightly depending on individual interest, but are likely to include:

This is an excellent opportunity for young individuals to become deeply involved with GEN’s work, get to know the ecovillage movement from the inside, learn the skills necessary to support the growth of an international organisation and network, and do something they believe in.

If you are interested in volunteering with GEN, please check out our volunteer opportunities here.

GEN was awarded the funds, by Moray LEADER, to execute the Moray Ecovillage Development Project starting January 2019. 70% Funded by the EU and 30% Funded by the Scottish government. The GEN project team, was made up of Findhorn Community members Kosha Joubert, Tessa Brock,  Ania Konarska and Esther Hirsch, which helped to further build ties between GEN, the Findhorn Community and locals and communities in the wider Moray area.

This project aimed to promote transnational cooperation between LEADER partners, including GEN and tsiMORAY, also with international partners and ecovillages, namely Kilden in Norway and Schloss Tonndorf in Germany, for cross-collaboration that leads to ecovillage development in Moray communities.

The project, by design, aims to become a model to support scaling of the ecovillage model throughout Moray in years following the grant period, eventually leading to widespread community adaptation to a post carbon, globalized and interconnected world.

The project built upon a preparatory project that engaged Moray leaders in ecovillage design principles in Estonia at the 2018 GEN Europe conference. Those leaders supported GEN, along with others, to pitch ecovillage design in alignment with Moray LDS objectives in a target 20 communities in Moray, selecting 3 community projects to develop as showcases. 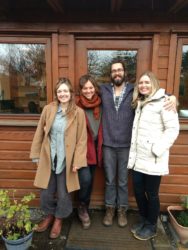 You can learn more about the Global Ecovillage Network by reading our annual reports, constitution, and other core documents.  Here