Findhorn Flower Essences made with love, in co-creation with nature

My name is Iona Leigh and my mother Marion began making the flower essences in 1992 after years of living and working in the Findhorn Foundation and community.

When asked about her life making essences, she said: “Making flower essences has led me into a deep connection with Nature and the intelligence informing the nature kingdom. Sitting in meditation before a flowering plant, I ask for guidance as to the qualities expressed by that plant and the properties that would be of healing benefit for humanity.” Now she emphasises the healing part more, to include other beings like animals. “My awareness has expanded. I still work in the Findhorn way that has been my training, using an attunement process which comes through intuition.. In the same way I tune in to people’s soul or higher essence to help them to heal..” 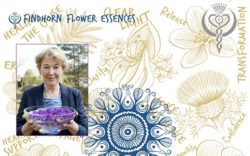 Marion went on to explain: ”A single flower remedy is like a powerful laser, but you need the right one. Whereas our Combination Essences and Room Mists often have more of an effect like a search light, for commonly shared life-issues.” The best-selling product is Sacred Space, a space-clearing room mist, which Marion originally created as a ‘cleaner’ for the Park Sanctuary group, contains a combination of the five elements of nature and pure essential oils.

Marion’s own favourite essence was Scottish Primrose. She said “This tiny, but incredibly potent. The flower’s keynote is ‘peace’. Marion described Findhorn Flower Essences as a manifestation of the energies of Findhorn and her own Findhorn training over almost 30 years.” Peter and Eileen were my teachers, in a powerful way. The essences were destined to come out of Findhorn, according to Dorothy Maclean. Now we’re out there in the world and the majority of our customers have never heard of Findhorn. So although we are trying to be mainstream, the Findhorn Spirit is sent out too.”

Marion Leigh passed away in 2019, when daughter Iona Leigh took over as Managing Director after years of being the company’s Education Director. Iona states; “We work as a team, using the Findhorn principles like sharing, attuning, transparent processes and Angel cards. The other side of the coin is economic; we have to work as a business, needing to uphold a cash-flow. We relate to sales, marketing, traders and employers with integrity, and consciousness, to get it right on all levels. We are in a phase of real harmony as a team. We recently moved our production offices to the Forres Enterprise Park, supported by the Highlands and Islands Enterprise. We are now expanding on a new global scale, sending our essences of light all over the world, while our educational workshops remain in the heart of the Findhorn Park Ecovillage community”.

SOME FACTS for FINDHORN FLOWER ESSENCES: 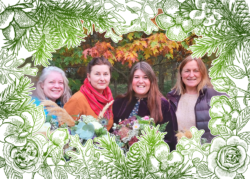 Purpose/ethos: Promote health and well-being by:

Income: from sales and education.