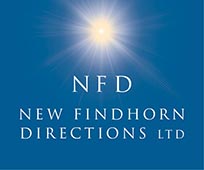 In the NFD Accounts office I talk with Pauline Walker, (who having arrived at the Foundation in 1974 has worked for NFD these past 14 years) and Bob Gordon, NFD’s Operations Manager. Later, Paul Randell NFD’s Managing Director joins us.

Like many people I have no clue what NFD actually does, beside clearing snow and repairing roads. Pauline and Bob explain some of the wide and varied roles the NFD undertakes, from running the Holiday Park to supplying electric & water, in addition to looking after the Park’s 15-hectare estate on behalf of the Titleholders Association, which includes maintaining the roads, street lights and common landscape areas and disposing of sewage. In Paul’s words: “NFD sits at the heart of our ecovillage community, engaging daily with our many organisations, residents and visitors, looking after the estate’s assets and shared common areas.”

The staff group consists of a mix of age from 18 to 64 years old and a large variety of personalities, what Paul calls ”quiet and shy to loud and bossy”. Over the past year the team has also increased its ex-Findhorn Foundation employees to four with the arrival of Jacqueline Palmer as Project and Commercial Manager and Shirley Barr as Reception Administrator.

Pauline mentions that in practice a large part of their role is “about giving service”, and with a smile adds “we often find ourselves helping and supporting people practically and occasionally, a part of that is simply maintaining healthy boundaries”. She continues: “One aspect that keeps the job fresh and enjoyable for me is that at the beginning of each day we’re never really sure what will happen and what we’ll be doing.” Bob adds to this that if something needs doing the team members often go ‘above and beyond’ with plenty of goodwill. Bob started as a handyman/warden five years ago and became Holiday Park manager two years ago. He works, as he says “as a Jack of all, a bit of everything. I enjoy my work. Without that, it’s pointless. We have a laugh and a joke, but we get the work done.”

SOME FACTS FOR THE NFD:

Year founded: In 1983 the Findhorn Foundation established a business wing, the NFD, so it could buy the Findhorn Bay Caravan Park.

Vision: NFD strives to embody the Findhorn Foundation’s guiding principles and ethos in its daily work in the commercial world.

Mission/Goal: To provide accommodation, infrastructure and other site services in the Park Ecovillage and in partnership with the Findhorn Foundation and community. 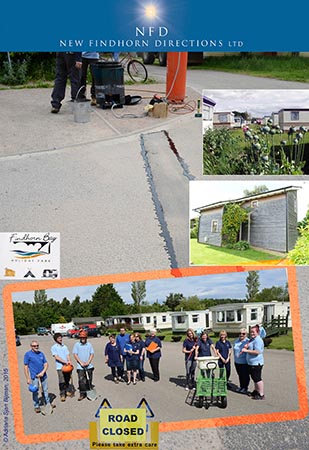