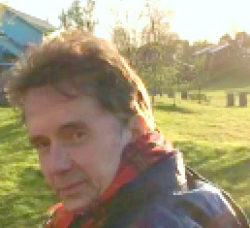 I live on The Park with my wife, Rebecca, where we run a B&B. Rebecca is also a co-worker in the Foundation and runs a therapy practice. Some of you may have seen us waltzing in one or other of the Sharings we’ve taken part in.

I first visited Findhorn in 1981 and my Experience Week was in 1982. Rebecca and I met here in 1984, but we didn’t become romantically involved until many years later. We began living on The Park in 2015 after it became clear to us that this was where we wanted to make our home. We bought our house here in 2016 and I became a councillor in 2017. The types of NFA projects I’ve been/ am involved include: data protection, database and constitution redesign, putting on events and celebrations and supporting the Sunday slots.

Besides being a councillor, I’ve volunteered for Trees for Life, I continue to volunteer for the Foundation and I’m one of Laura Pasetti’s Sacred Stage theatre group.

I was born and grew up near Perth, Scotland and so Findhorn is not so far from my original home. I’ve felt drawn to the Findhorn Community since I was 16 years old, when I saw the Magnus Magnuson programme, but I only chose to make this my home in 2014 when I lost my job and the needs of my elderly parents became more significant.

This community supports me grow and enables me to give back to: it, the wider community and the planet. I feel very lucky to live here.