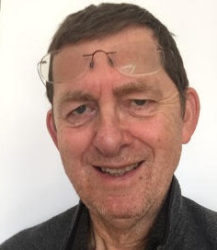 Andrew moved to Findhorn in 2017 following retirement from the European Commission where he had worked since 1978. He now lives in East Whins with one of his seven sons – and a dog. He’s active in the East Whins co-housing community (as treasurer). He’s also a regular at morning Taizé in the Nature Sanctuary.

He worked for some ten years as a professional economist in Brussels. The rest  of his professional career was in support of the reunification of Europe.  His job was to manage multinational teams in complex and politically sensitive environments to help countries successfully join the EU. He lived and worked in Poland, Romania, Latvia and Ukraine as wells Brussels.
After retirement he sought time and space to figure out what to do in the next phase of his life. So walking out one midsummer morning from London he crossed France and Spain to Santiago de Compostella. Approaching Santiago he decided to requalify as a teacher and go back to work. However ill health intervened. His body sent a clear message that it was done with full-time work.
So he came to Scotland, to Findhorn, where he had longstanding family relations, as a man of leisure. But still feeling the need to do something useful volunteered to join the NFA Council.
NB the surname came to Britain in 1906 with his paternal grandfather who was a refugee from Belarus forced out by the threat of Tsarist pogroms. On the other side his mother’s parents were economic migrants to Scotland during the First World War