The purpose of the Collaboration Circle is to ensure that coordination and collaboration takes place within The Park Ecovillage, Findhorn whenever it is appropriate.

More specifically its role is:

– For example, through information sharing, supportive advice (when requested) and initiating collaboration, action or joint operations amongst well-defined groups on specific projects or areas.

– In response to these issues, suggest clear directions for the community – whether in the form of visions, directions, statements, policies or working groups and shared platforms for communication and action.

The focus of the circle is to nurture collaboration and provide leadership when needed. It is not a governance body. The ColCi can thus provide leadership and direction, but cannot make decisions that are binding for its members or the community’s members. The Circle’s recommendations only have authority over its members’ operations if they decide to adopt them as their own policy.

The circle, which meets for 2 hours every second month, is composed of representatives of the main organisations of the The Park Ecovillage, Findhorn, not of individual community members. Each organisation has one member. 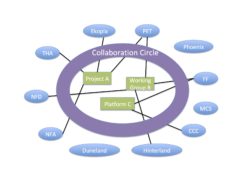 If any member of the group misses 3 meetings in a row, they will be asked to appoint an alternative representative, unless the circle decides otherwise.

Other organisations and individuals can take part in working groups and other collaborations held or initiated by the circle. They can also be invited to circle meetings as and when needed.

If an organisation wants to leave the Collaboration Circle, this is to be communicated in writing to the focalisers through and reported at the subsequent meeting. Membership fees for the current year will not be refunded.

From 2015 to 2017 a Community Change Workgroup explored whether it was time for some major changes in the Findhorn Ecovillage Community, due to the increase in its size and complexity. One of their main conclusions was the need for a Community Coordination Circle composed of representatives from the main stakeholder organisations in the community. During this group’s ensuing discussions with the community it became clear to them that the community was not ready for such a step. So instead they proposed 2 strands of action:

The tasks given to the enquiry circle were:

The first Enquiry Circle meeting was held in April 2017 and the circle ran until September 2019, when it decided to continue with the expanded role described above and call itself the Collaboration Circle (ColCi).

ColCi therefore set up a working group to see if we could synthesise all the views being expressed into a vision of what sort of housing the community needed, and thus offer the community a sense of direction. This group included relevant members from outside the collaboration circle and consisted of: Gordon McAlpine (MCS), Stephen Couling (PET), Iris Toister( FF), Owen Jarvis (NVG, FF, YPI) & Cornelia Featherstone (CCC).

Our aim was to have the statement ratified by all the organisations who were members of ColCi. However, not all of the boards involved were able to find the time for this, and it was therefore never openly published within the community. We learnt from this that ratifying ColCi reports may be unrealistic, and it could be better in future just to publish them as the combined thinking of the ColCi circle.

In practice, the process of creating the statement was certainly of help to Duneland in the planning of the North Whins development, and the master plan for this was pretty well aligned with ColCi’s direction statement.

Local Development Plan 2020: In March 2018 the Enquiry Circle met to discuss a response to The Moray Council’s consultation about the Local Development Plan 2020 in relation to a proposal for the development of residential and holiday accommodation on the field at Cullerne Farm. As a result the Findhorn Foundation made a formal response to the Council on behalf of the community. In the end the proposal was rejected by the Council and did not appear in the new Local Development Plan. The discussions also included a meeting with our neighbour, Edward Bichan, who expressed a strong willingness to collaborate with the community were any development to go forward.

Mental Health Strategy Group: In 2019 ColCi endorsed the setting up of the Mental Health Strategy Group, recognising the importance of a cross-organisational mental health strategy in our community. And we agreed that each of the member organisations would actively engage with the development and implementation of policies and procedures to enhance and safeguard mental health and well-being in our community.

COVID Action Group: was created by ColCi in March 2020 to provide a forum to facilitate community responses and initiatives in relation to the Covid pandemic.

DevCom: At the June 2021 ColCi meeting the Findhorn Foundation reported that its trustees had set up the DevCom group in order to explore the next stage of development at The Park, especially with regard to the future of FF assets that are used by the community at large. Over half of the Collaboration Circle members subsequently became members of this group. As the remit of DevCom is very related to the remit of ColCi it was also agreed that DevCom would provide progress reports for each forthcoming ColCi meeting, and that minutes of DevCom meetings would be made available to all the members of ColCi.

Carbon Neutral by 2030: In September 2021 we agreed to endorse a grant application, written by Roger Doudna and Goran Wiklund, for a feasibility study on how to make the Findhorn Ecovillage carbon neutral by 2030. And we set up a subgroup to initiate and steer this project. The group has been successful in obtaining a £10,000 grant from the lottery fund. And in October it  held a Sunday Slot where the Energy Masterplan for The Park was presented for discussion within the community. This master plan had already been developed by Paddy Atkinson through the Energy Technology Partnership. The steering group is currently advertising for a project manager. Once that appointment is made, another Sunday Slot will be held to engage community support for the project.

Community Name: One of the tasks given to the Enquiry Circle by the CCWG was to suggest a name for the community. After consultations within the community and with representatives for our neighbours in Findhorn village, the member organisations of the Collaboration Circle have agreed to use “The Park Ecovillage, Findhorn” as the name for the settlement. In August 2022 an onlinepoll amongst community members showed 92% support for this name.

Summaries of Meetings and Articles appearing in the Rainbow Bridge

Follow the link above to access Minutes of the Collaboration Circle Meetings.   Minutes are added to this shared Google Drive from time to time.