the first public exhibition of paintings by Brian Nobbs

‘I see the exhibition as a chance for everyone who may be interested to see what I have worked on in the last 30 years and share whatever part of my inspiration has meaning for them.’ – Brian Nobbs 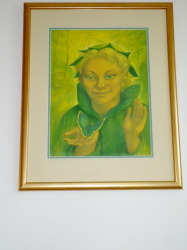 Brian’s first artworks at Findhorn, intuitively produced dot-drawings of devas and elementals in the early 1970s, illustrated Dorothy Maclean’s and R. Ogilvie Crombie’s contacts with beings and intelligences of nature.

He was part of a group of artists who arrived together to build and work in a row of art studios in Pineridge. All still stand and two still follow their original purpose.

Although primarily a painter at the time, Brian began to throw pots here and over many years became affectionately known as The Findhorn Potter. He returned to manage the pottery at Peter Caddy’s request in the early 1990s and retired in 2012. Now seventy-five, he continues to paint diverse works at home, of which this exhibit includes around twenty.

Brian will officially open the show on Saturday

8th November at a time TBA in next week’s RB

Text and photo by Elizabeth Marriott.