You are here: Home / About / About the NFA 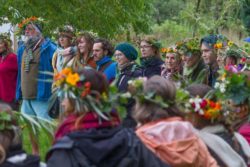 The New Findhorn Association (NFA) is the community association for individuals and organisations within a radius of 50 miles of Findhorn, who acknowledge to live and work by a set of Core Values laid out by the community, which we call our “Common Grounds”.

The Findhorn Foundation has always attracted people. While some were integrated into the Foundation others settled into their own places in the vicinity. But they were looking for interaction with the Foundation people and their educational and other activities. A structure called Open Community was established to enable this. As the numbers increased there came the time when this body was ready for being more defined and organised. So in 1998 a group of people set to work to create a new organistion with a constitution of its own. What emerged is the New Findhorn Association as we see it today.

The membership of this New Findhorn Association is now defined by catchment area – a 50 mile radius around the Findhorn/Forres area – and by the intent to live by certain values and standards as laid down in the so called Common Ground and this includes non-members as well as members of the Foundation and a number of business- and other Organisations.

The purpose of the New Findhorn Association is the holding of community aspects as they evolve. To this effect it is equipped with two so called “Listener Conveners”, one male, one female, who are elected for two year terms of office. Together with a number of elected Councillors who are the Board of the Association. Community issues as identified by listening to the pulse of the community are brought before the Council where it is decided which course of action to take if action is called for.

At present there are approximately 350 individual members and their families and a membership of 40 organisations. People are attracted by material factors such as a less hectic lifestyle in a less densely populated area with very good infrastructure and a thriving Steiner School – the Moray Steiner School – and by their search for a meaning in life, encouraged by the educational facilities of the Findhorn Foundation on the one hand and the “walking of this talk” by the community as a whole.

See also our Community Vision: What we would like to become.